Four talking points ahead of City’s trip to Old Trafford…

Everton’s 4-0 win over United drew a mixture of reaction throughout the football world.

Of course, harsh words were said – particularly from former United captain Gary Neville and from manager Ole Gunnar Solskjaer – with the latter saying the Manchester derby was the ideal stage for the players to prove how much they care.

So, a wounded United ahead of the derby and a game City need to win – it has all the makings of a classic clash between the Manchester clans.

WHAT A FEELING: David Silva starts the celebrations after his opener against United

Many Liverpool fans believe the rivalry they have with United means City will just have to turn up to claim three points – if only! – this is our game in hand and in many observers’ eyes the trickiest-looking of all the fixtures that remain.

On a positive note, City have lost just once in eight Premier League visits to Old Trafford, winning five and drawing twice since October 2011, with an aggregate of 17-8.

It will take another monumental effort by the Blues who are well aware that anything less than victory will put Liverpool firmly in the box-seat for the title. 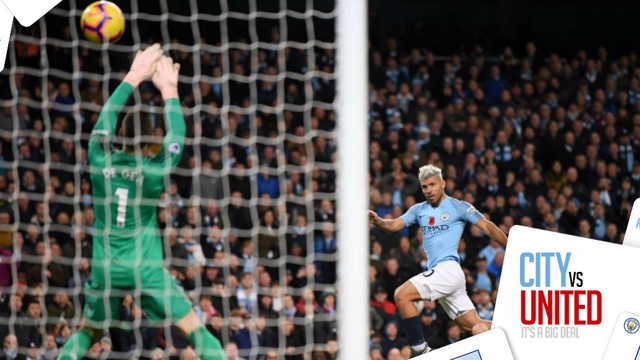 Just as he was approaching his masterful best, his injury jinx appeared to strike again as he was forced to come off during the edgy win over Tottenham.

De Bruyne’s energy and vision – plus lack of season fatigue – was exactly what City needed to drive us over the finishing line and the prospect of him being side-lined again is cruel for both player and the Club.

Of course, we won’t know the extent of the injury until Pep Guardiola’s press conference tomorrow afternoon, so let’s keep our collective fingers crossed that it was maybe not as bad as it seemed.

LANDMARKS ON THE HORIZONS

City go into the 178th Manchester derby on the cusp of a number of major milestones.

Two more goals will confirm this City side are the most potent the Premier League has ever seen with the Blues on 155 goals in all competitions this campaign.

The 156 City scored in 2013/14 is the current record and it seems likely Europe’s top goal-scorers will beat that figure by quite a few.

And Phil Foden’s winner against Spurs also meant the Blues have scored 99 goals at the Etihad this season – another incredible feat and one that hopefully will move into three figures with our final home game against Leicester City.

On the back of last season’s Centurions campaign, it is a stunning follow-up by a team who continue to set the bar higher and stretch the boundaries of what is achievable almost on a weekly basis.

CASE FOR THE DEFENCE

It must be hard being a City defender, particularly when the man of the match awards are handed out!

Pep Guardiola’s side spend the majority of games camped in the opposition half, looking to unpick packed defensive lines by one means or another.

SOLID GOLD: City’s defence has quietly gone about its business

But the fact is our defenders have been superb throughout.

Kyle Walker’s consistency and contribution continually slips beneath the radar, as do the efforts of our central defenders, whether that be Aymeric Laporte, Vincent Kompany, John Stones or Nicolas Otamendi.

The impressive Danilo has never let anyone down when he’s played, nor have Benjamin Mendy, Oleksandr Zinchenko or Fabian Delph when they have been called upon.

As for Ederson, there surely can’t be a more complete goalkeeper in world football – something he proved again on Saturday against Spurs where he made at least four top-class, crucial saves.

CLASSY: Ederson has everything in his locker

Against Tottenham we were reminded just how good our defence is, and their combined solidity will be a critical factor in our bid to retain the title in the games that remain.

“I’m happy to be able to play alongside Messi, I have always followed him & now my idol will…